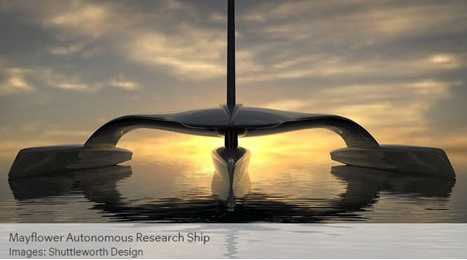 If you’re travelling overseas on the Atlantic ocean, and you see a futuristic ship with no crew sailing on its own, don’t get scared. It’s not the Flying Dutchman from the future (today’s Flying Dutchman would definitely not sail on such a ship).

This one, is called Mayflower, and it is an autonomus research ship or better known as MARS. It seems that scientists are having a blast, using acronyms that make an actual word.

Currently, the Mayflower seems to be in the plans of Plymouth University. It works using solar energy and it will probably sail from England’s Plymouth the year 2020. That is due to the fact that the scientists that have worked on this project are still looking for funds.

Using one or both of its sails, the Mayflower will be in place of moving autonomously at a speed of 20 nodes per hour (equals to 37km/h). At days when the wind is not helping that much the ship will move using its electric engine and will be able to reach 12.5 nodes per hour (23km/h).

There will also be a GPS system in order for the pilots to move the ship and avoid any unfortunate crushes. It may not carry any crew members so the tragedy would not be as big as the Titanic, but it would definitely be a loss of cargo, money and advanced technology.

According to MSubs’ Brett Phaneuf, the crossing could conceivably be completed in 7 to 10 days, although it may end up lasting several months depending on what tasks MARS is put to along the way. Areas of research that it will be conducting include meteorology, oceanography and climatology.
An exciting journey, during which we’d like to learn what the ship will discover.