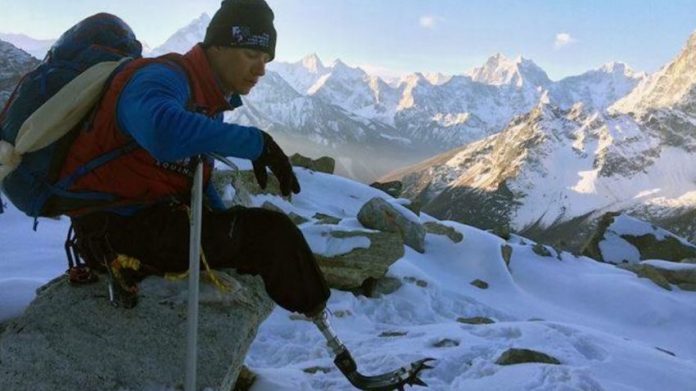 Charlie Linville, a former US MarineStaff Sgt., has successfully completed an Everest expedition on 18th of May. He achieved this feat on his third attempt since having his right foot amputated in Afghanistan in 2011. He has now become the first combat-injured veteran to have managed to complete this endeavor.

Accompanied by Nat Geo’s “Going Wild” host Medvetz, and supported by The Heroes Project by Equinox, he completed the mission. Chad Jukes, another combat amputee is on the same mission, but hasn’t completed it yet.
His first attempt was in 2014 when they decided to return from the Lobuche Peak (20,000 feet) after 16 sherpas lost their lives due to an avalanche on April 18.

Last year they couldn’t help but turn their efforts towards the people affected by the earthquake in Nepal. This year, after arriving at the Base Camp on April 17, they faced delays because of a snowstorm. After advancing to Advanced Base Camp on 2 May, they went through an acclimation training to get adjusted to the extreme conditions. Then they reportedly began their climb on Sunday and reached the peak on the 18th.

Charlie had begun training for this expedition late last year along with Medvetz and the Equinox team. They would train for four to six hours a day, while being subjected to conditions such as altitude deprivation and cycle for two hours at a simulated altitude of 17,000 feet.

In the final eight weeks of the training, the two slept in a Hypoxico Chamber, where the altitude and oxygen level was simulated at 18,000 feet. They went through a grueling 24×7 training protocol.

In 2015, a Film named Everest adequately illustrated the difficulties that that people face while pursuing this passionate obsession. When that is combined with someone who has setbacks. such as those faced by Linville, it makes some story.

Achieving such a feat is truly astounding and exemplary. Hundreds consider giving up after a few setbacks, let alone when having amputated limbs, but this is one story that one seeks when they’re about to give up.