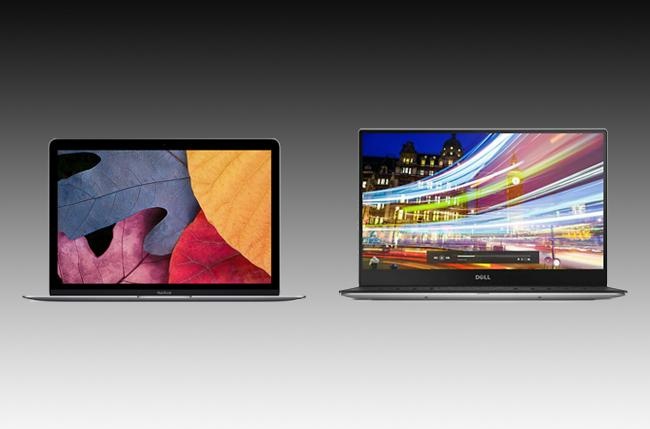 MacBook Pro is a premium laptop from Apple. In addition to traditional Inspiron laptops, Dell also manufactures XPS series, which have a high-end configuration. In this MacBook Pro Vs Dell XPS 13 comparison, we will be taking a closer look at specs, features and price.

Moreover, the laptop is designed in a rectangular silver body with rounded edges. The laptop offers Intel Core i5 processor with a maximum clock speed of up to 2.7GHz, 8GB RAM, 128GB SSD storage space, coupled with Intel Iris Graphics 6100.

Loaded with OS X Yosemite, the Apple MacBook Pro offers a DVD drive, two USB 3.0 and two Thunderbolt 2.0 ports for faster connectivity with various modern devices. The trackpad is equipped with force touch technology and the laptop ships with a MagSafe power adapter paired with an AC wall plug.

The MacBook Pro, manufactured suing state of the art technology, will be useful for both work and entertainment purposes, including college assignments. This is due to the total weight of the laptop, which is only 1.6kg, enabling you to easily carry the device during travelling.

Dell XPS 13 includes 256GB SSD, which is larger than what MacBook Pro offers. Moreover, the screen is slightly larger and also packs a borderless infinity display with a high resolution of 1280×1080 pixels.

Compared to the MacBook Pro, the Dell XPS 13 will have more viewing area due to higher resolution. You will not find any borders on the four sides of the laptop.

It is also possible to upgrade the display by integrating an UltraSharp QHD+ (3200×1800) IGZO IPS panel, which is capable of providing a wide viewing angle of up to 170-degrees.

Regarding graphics, Dell XPS 13 offers Intel HD 520, which is included with the processor. Similar to MacBook Pro, the laptop will not offer any dedicated graphics card but includes stereo speakers with two USB 3.0 slots.

The big disappointment with XPS 13 is that the laptop doesn’t include a built-in DVD drive.

While MacBook Pro is capable of delivering up to nine hours of battery backup, the XPS 13 includes a special battery saver since the device is loaded with Windows 10 and latest Intel processor.

As you can see, both laptops include almost similar features. However, the price plays a critical factor in decision making.

If you are worried about the price, you can consider the same laptop with 4GB RAM, which is priced at $800. If you can shell out $2,000, then you can buy the same XPS laptop with QHD+ display.

Both Apple MacBook Pro and Dell XPS 13 are not oriented for normal users. The laptops will be useful for IT professionals who require a portable laptop to carry around.