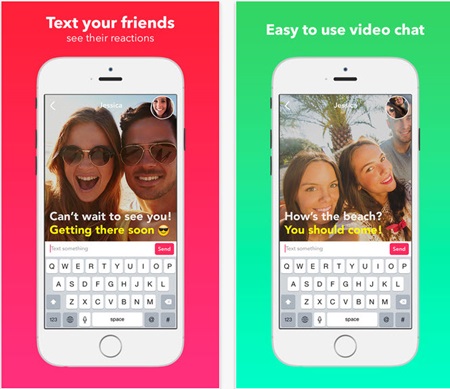 Sunnyvale, US – One of the most essential characters of a video call is ‘audio’. Imagine a video call without an audio; where the other person is able to see you, but not able to listen to you. Yahoo! (NASDAQ: YHOO) has developed such an app and officially unveiled its audio-free messaging app, Livetext, in five countries.

Earlier in the month, Yahoo had unveiled its Livetext app on iTunes App Store in Hong Kong and Taiwan. Now, Yahoo has officially launched it in five additional countries. As of now, Yahoo has limited the geographical reach of its new app in the US, UK, Germany, Canada and France. The team working on this app primarily consists of the employees of MessageMe; an app with similar features which was acquired by Yahoo in 2014.

According to Yahoo, Livetext app is ‘live video texting’; a combination of both one-to-one text messages and a video live stream. Each Livetext begins when both the users agree to open the session; thereby creating an obstacle for spam or abuse. Livetext starts as a live stream and then the text is overlaid on this live stream, making it a very unique concept.

Livetext helps to communicate through text messaging like any other text messaging app with an additional feature of video and that too without an audio! Video calls are far better at expressing emotions rather than using emoticons while messaging, but video call’s audio component leaves no room for privacy and makes private conversations public. So Yahoo, unlike other video call apps, removed the feature of audio; making just the video part as the background of the text messages. Yahoo cleverly made a twist by silencing the audio.

Livetext will not keep the track of the conversations of the users. The history will be deleted as soon as the user closes the app; thereby eliminating the privacy concerns. However, the app also has its shortcomings. At this stage, the users will not be provided with group messaging feature in this app.

After abandoning Yahoo Messenger, Livetext is the first step of Yahoo towards the messaging world. Although, when compared to competitors like Google and Facebook; Yahoo is pretty late in this era of instant messaging. However, Yahoo is planning to build a strong user base and to capture the market while giving stiff competition.

Livetext is available on iTunes App store and Google Play Store for both Apple and Android devices in the aforementioned countries.