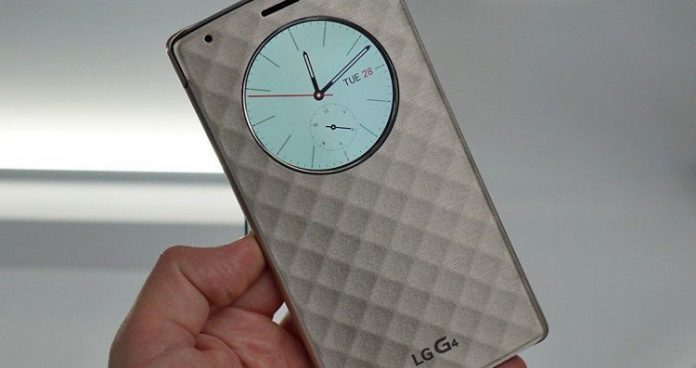 It is known to us all that LG will officially announce the G5 at MWC 2016 next week. However, it looks like LG can’t wait for the official launch to happen and has announced accessories for the upcoming handset. At the moment, the accessory that has been revealed is a Quick Phone cover. This is a touch-enabled cover for the phone, that is similar to the LG K10’s Quick Cover View.

LG has already teased the always on display for its upcoming handsets, so what this cover does is that it features a window that enables users to see the “always on” display of the phone, like the date, time, and notifications. However, like we said, it is touch-enabled, meaning that owners will be able to interact with the phone to a certain degree even with the cover closed.

According to the examples that LG has put forward, the capabilities of this interaction include the ability to take calls without having to flip the cover open, or to control alarm settings.

As for the design of the cover, it will feature a glossy metallic finish which lends itself to a pretty classy look. Unfortunately, as of now, there is no word on how much the cover costs, though it does look like a cover that is worth checking out if you want to put on official accessories to your new LG G5 device after its launch.

Furthermore, the device will sport 5.6 inches wide screen that has the resolution of 1440 x 2560 pixels and a pixel density of 525 ppi. It is powered by a Qualcomm MSM8996 Snapdragon 820 processor along with 4GB of RAM and 64GB of internal memory, which is expandable up to 200GB via external microSD card. In the camera department, the LG G5 will come with dual 20MP rear cameras and an 8MP front facing camera.