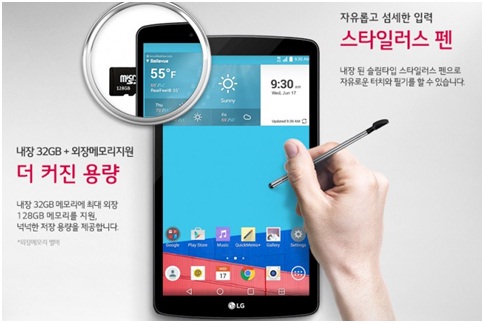 The LG G Pad 2 8.0 is only released in South Korea for the time being. However, given the larger-scale release of its predecessor; it wouldn’t be surprising to see the tablet reaching international markets. The company has added certain features like USB 2.0, Microsoft Office Suite which will ideally allow for increased productivity and use.

The tablet sports an 8-inch IPS LCD capacitive touchscreen having a pixel density of 189 ppi. The display is protected by Corning Gorilla Glass 3. The tablet measures 210.8×124.2×9 mm and weighs around 347 grams.

It runs on Android 5.0.2 Lollipop OS, which is a bit surprise as the newer Android 5.1 Lollipop has been available in the Android market. It is powered by Qualcomm Snapdragon 400 chipset with a quad-core 1.2 GHz Cortex-A7 CPU. It sports 1.5GB RAM and has double internal storage of 32GB compared to its predecessor. The storage capacity can be expanded up to 128GB with the help of microSD card.

The LG G Pad 2 8.0 tablet houses a 5MP rear camera and a 2MP front snapper. The tablet comes with GSM/3G/LTE support and backed by 4,200 mAh battery. It also comes with a thinner-tipped stylus measuring just 3.5 mm across the waist; allowing for more accurate input.

The tablet comes with full-sized USB 2.0 port; which can be used to attach an external keyboard, gaming controllers, flash drives and mice. There is no requirement of adapters. It also comes with pre-installed Microsoft Office Suite as well as other premium software features including Quick Memo App, Qpair and Knock Code.