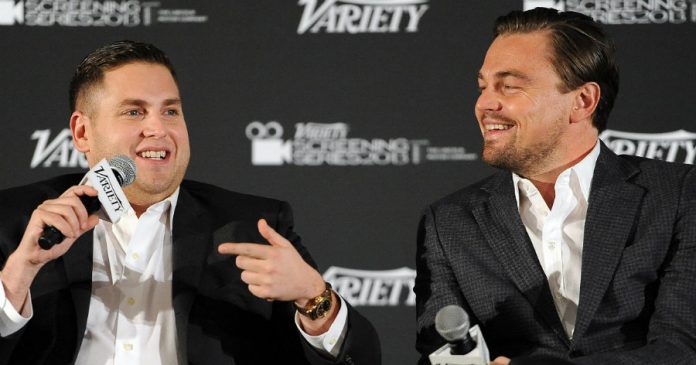 Oscar-winner actor Leonardo DiCaprio managed to scare “Wolf of Wall Street” co-star Jonah Hill in New York City’s West Village by sneaking on his back and pretending to be a crazy fan looking for pictures.

The prank was caught on camera revealing Hill’s reaction, going from panic to amusement, and finally embracing his colleague.

It’s no secret that pranks are pretty common amongst celebrities. Famous stars like George Clooney, Jimmy Kimmel, and Matt Damon rank on the top of Hollywood’s master pranksters, but Leo DiCaprio may be entering the competition with his latest mischief, The prank consisted on surprising Academy-nominated Jonah Hill, who was exiting a restaurant in West Village.

Dicaprio, wearing a newsboy cap and sunglasses, stormed up to Hill with his phone, pretending to be a fan and taking pictures, a thing most celebs are accustomed to.

Leonardo DiCaprio running up to Jonah Hill pretending to be a fan taking pictures ? pic.twitter.com/yJmU45O93r

Jonah Hill reacted with genuine panic at first, until he realized what happened and proceeded to share a laugh with his peer, then giving him a hug and enjoying the moment. But this is definitely not the first time the actors have pulled their strings for the sake of friendly comedy.

Dicaprio and Hill go a way back

Both actors met while working together on the set of Martin Scorsese’s “The wolf of wall street” (2013), the second major role for Jonah Hill after sharing the screen with Brad Pitt in “Moneyball” (2011). Since then, Dicaprio and Hill became close friends, and as friends do, they started to make jokes and pranks to each other.

The first funny – and public – moment of the duo happened on Jonah Hill’s monologue for SNL back in 2014, where he was hosting for the 3rd time. Dicaprio jumped to the set and embrace his colleague to reenact the famous scene from “Titanic”.

Imagine living a life where your reaction to something like this is "oh thank God it's just Leonardo DiCaprio" pic.twitter.com/iZdKA1YlgY

The prank war followed this year at The Golden Globes, where Hill entered the stage disguised as a bear and making jokes at Leo, pretending to be the animal from Alejandro Iñarritu`s “the Revenant”, from which.Dicaprio won a golden globe and an Oscar for best male actor.

Dicaprio is currently planning to host a fundraiser for the democratic presidential nominee, Hillary Clinton. “A conversation with Hillary” is the name of the event that will take place on August 23 in Los Angeles, where Clinton is expected to visit at the time. The fundraiser is priced at $33,400 per attendee, according to Variety. A clear sign of support from the actor to the achieved politician. Jonah Hill maintains himself busy too, with the promotion of his latest movie “Watch dogs”, out August 19th.