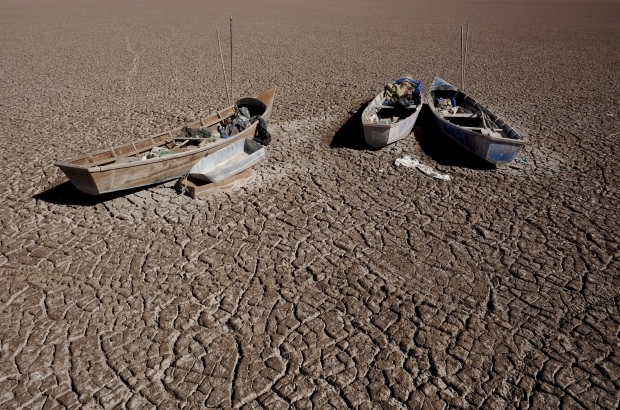 Lake Poopó was officially declared evaporated last month. Numerous people lost their lives and have left the area. Dirk Hoffman, a German glaciologist, said:  “This is a picture of the future of climate change”.

The main cause for this dramatic disaster seems to be the meteorological phenomenon El Niño, which caused the dough. However, it is also said that another factor is the water which is diverted from Poopó’s tributaries, mostly for mining, but also for agriculture. Whatever the real cause is, the truth is that more than 100 families have sold their animals and have left. Only the elderly remain.

According to Juvenal Gutiérrez, 29, who moved to a nearby town, there is no future. The governor’s office said that at least 3,250 people have received humanitarian aid. 75 species of birds have already gone from the lake. While Poopó has suffered droughts fueled by El Niño for millenniums, its fragile ecosystem has experienced unprecedented stress in the past three decades. Temperatures have risen by about 1 degree Celsius, 1.8 degrees Fahrenheit, and mining has pinched the flow of tributaries, increasing sediment.

At this point, we have to mention that Mr. Bush (2010) was one of the authors of a study for the journal Global Change Biology, that said that Bolivia’s capital, La Paz, could face a catastrophic drought this century. It predicted that “inhospitable arid climates” would lessen available food and water for the more than three million inhabitants. The study argued that: “Irreversible changes in ecosystems could occur, causing massive emigration and greater conflicts,”.

Mr. Flores states that: “Something could have been done to prevent the disaster”, and continues by saying that “Mining companies have been diverting water since 1982.” After thousands of fish that died in late 2014, the Universidad Técnica in the nearby state capital, Oruro, found that Poopó had unsafe levels of heavy metals, including cadmium and lead.

The president of Bolivia’s National Chamber of Mining, Saturnino Ramos, said that Poopó’s tributaries were natural, not from mining and so the government asked the European Union for $140 million for water treatment plants for the Poopó watershed. However, researchers say that it may be too late.