Hyundai has finally followed in the footsteps of its rivals, Nissan, Honda and Toyota by making a standalone brand, Genesis, for culminating the luxury, premium automobile market.

You might know about the Genesis because of its premium look and bang-for-buck luxury offerings with the most promoted high-end one being the G90. Still, in the North American Auto show, the company brought the car that had started all the hype, by changing its name under the G80 moniker.

However, don’t let the change in the name confuse you. The update has made the G80 the smaller brother – name-wise – but there is no change in the sedan. Exterior style cues seen in the former variant have been maintained in the new one, as well as the interior comfort and price tag.

The car seems to be the recipe to success and is sure to cause trouble for its German rivals, as the carmaker sold more than 100,000 units in just 18 months. This German looking car has a $38,000 starting price in the US for its 333hp 3.8L V6 powerplant installment.

When confronted about this latest development, Hyundai vice chair, Eui Sun Chung, said at the brand’s US launch, “We are applying ourselves to entirely new objectives to set the benchmark for luxury. With Genesis, we will strive to meet the desire of a new generation of luxury customer… (who) value unique experiences over mere status.” 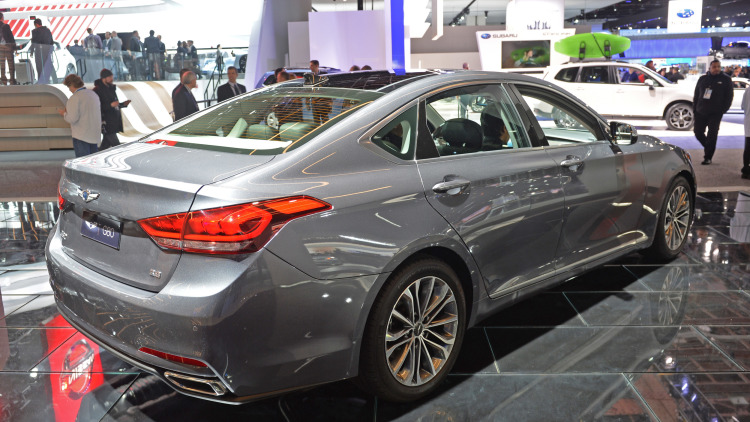 Jack Nerad, an analyst at Kelley Blue Book said, “What they’re limited by is ‘that’s just a Hyundai’ — the perception of that’s what the brand is.” He was hinting at the fact that Hyundai is still perceived by many as the cheaper alternative to other cars. “The current Genesis sedan… it’s a very good value, but has not resonated well sales-wise because people buying luxury want to have the prestige of the brand,” he added.

Hyundai has also announced that it will be looking for initial launch at the United States, Asia and the Middle East, eventually moving to Europe as the brand will further expand to six offerings by 2020.

When asked about this move,  Mike O’Brien, vice president of corporate and product planning for Hyundai Motor America said, “Our ability to start fresh in this new era instead of having the legacy or burden of what was in the past means we can start with something new and invest more appropriately. Our strategy is for those customers that are just getting ready to buy a luxury car to give us a shot,” he said in an interview on the sidelines of the show. “That is going to be our challenge: How do we make a more appealing shopping environment so people give us a try?” he added.

This throws light at the fact that it will have to capture the market that has been dominated by the likes of Mercedes and BMW.