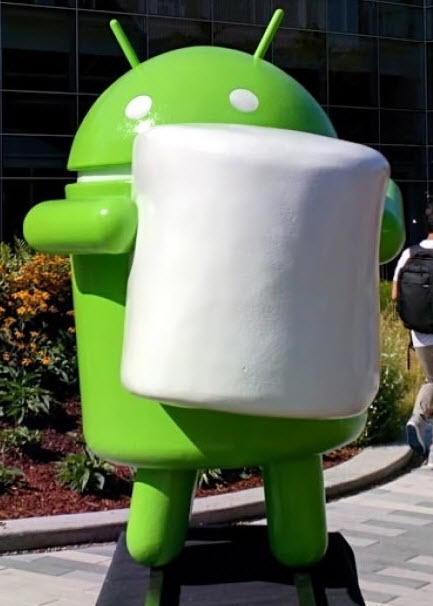 US – Google (NASDAQ: GOOGL) has officially announced Android M as Android 6.0 Marshmallow. The tech giant rolled out the statue of a mascot carrying a Marshmallow onto the Google lawn. It has been placed along with the other statues; which memorize the past Android builds. Android Marshmallow will start with version 6.0.

Android versions followed the tradition of naming the builds after desserts, starting with the version 1.5, named Cupcake. The trend followed in subsequent updates in alphabetical order as Donut, Eclair, Froyo, Gingerbread, Honeycomb, Ice Cream Sandwich, Jelly Bean, Kitkat and Lollipop. And the latest addition to the list is of course Marshmallow!

Google unveiled the Android M during their annual I/O conference last May and now Android Marshmallow is expected to be rolled out publicly starting this fall. Among the new features provided by Marshmallow are doze features; which will double the standby time. This feature will put the phone into a deep sleep when not in use; thus improving the standby and overall battery endurance. It will also aim at optimizing the performance by lowering the RAM usage.

Android Marshmallow includes an official app permission manager, which will give users more granular control over what information apps can access. USB Type-C support, capability of charging other devices and Google’s new Android Pay mobile wallet platform are also included in this new Android version. And a new fingerprint scanning feature will become native with this upcoming version.

According to Google’s blog post, Android Marshmallow new Developer’s Preview is now available for supporting Nexus devices, including Nexus 5, Nexus 6, Nexus 9 and Nexus Player. The Android 6.0 SDK is final as well; but the device system images are still developer preview versions and are not intended for consumer use. The developers can now upload their Android 6.0 Marshmallow compatible apps to the Google Play Store.