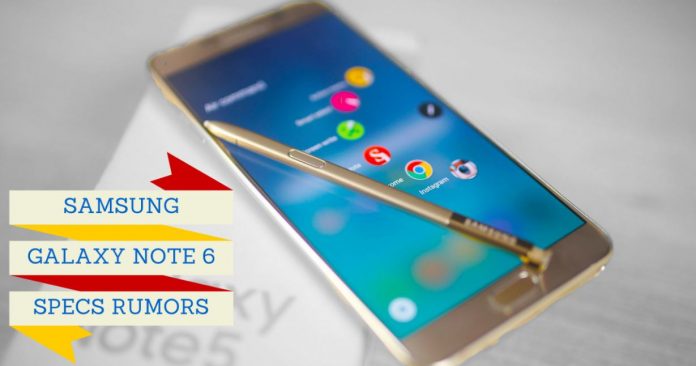 If rumors are to be believed, Samsung Galaxy Note 6 will be launched within the next few months. Since the previous models were a big hit among smartphone lovers, there is no doubt that Galaxy Note 6 will also be welcomed by tech geeks. Here is what we know so far about Galaxy Note 6 specs, according to rumors.

The Galaxy Note 6 is expected to be equipped with a 5.8-inch super slim AMOLED Corning Gorilla Glass display, instead of the 5.7-inch display we saw in the previous counterpart. However, there will be no change in the number of pixels on the screen.

Based on recent rumors, the upcoming Galaxy Note 6 will ship in two variants. While the first model will bear a Snapdragon 823 processor and 4GB RAM, the other variant will be equipped with an Exynos processor coupled with 6GB RAM.

On the storage front, the Galaxy Note 6 will be packed with 32GB, 64GB and 128GB, with a facility to expand the storage to up to 256GB. However, it is widely rumored that the model with 32GB can be expanded up to 64GB only.

You can also expect an enhanced 16-megapixel f/1.9 lens primary camera paired with a 5-megapixel front-facing snapper. Most likely, Note 6 ships with dual-LED flash to enable you to capture high-quality images in low lighting conditions. It is also rumored that Galaxy Note 6 will have a new feature like Live Photos, which was found in iPhone 6 and iPhone 6s Plus.

Even though Android N is available in preview mode, it is likely that Note 6 will ship with Android 6.1 Marshmallow. However, users will be eligible for a free upgrade to N as and when available.

Talking about other specifications, Galaxy Note 6 will feature fingerprint and retina scanner. Moreover, the device will be protected against water and dust since there are rumors that Samsung has applied for IP68 certification.

Expected to be powered by 4,200mAh battery, the Galaxy Note 6 will be available in Gold Platinum, Silver Titan, White Pearl, Black Sapphire variants.