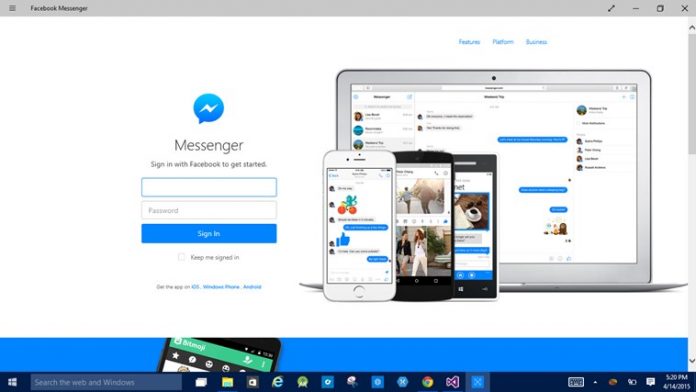 Facebook has posted details of its universal Windows 10 Messenger app on Microsoft’s Windows Store, but the beta isn’t yet available for download.

The new Messenger app popped up in Microsoft’s Store on Thursday, a day after details of it were leaked by an Italian Windows fan site, revealing features and the fact it’s for tablets and PCs.

As for the messenger, it has got quite a similar functionality to the browser application that the Windows 10 used to access earlier. As for the interface, it is quite similar to the iPad application. However, as per Facebook’s description, the app also supports notifications and includes live tile integration to flag up the waiting messages.

A Facebook spokesperson commented that it has been testing the Windows 10 app with a “small percentage of people in a few countries“. This launch doesn’t seem unrealistic at all, as Facebook has launched the Instagram beta for Windows 10 mobile devices, this week.

The current version of the application is available for the mobile version of the operating system, however, it has not been updated much and is quite dated. According to the Italian blog that had reported on the release of the app, the messenger will be available in three languages; that is English, Spanish and Italian.