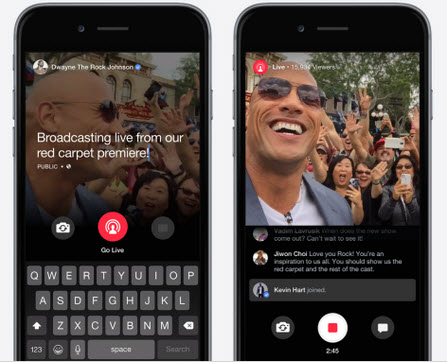 US – The social networking giant Facebook (NASDAQ: FB) has rolled out live video streaming feature for public figures and celebrities to broadcast their live videos to their fans. The “Live” feature is available in Facebook’s Mentions App launched in July 2014; which is designed to help the verified celebrities to post easily, monitor and respond to comments, likes and messages sent by their fans. At present, the Facebook Live Video Streaming feature is available only to public figures and celebrities verified by Facebook and not for common users.

The verified celebrities can start live broadcasting which will be posted to the News Feed and the real-time overlaid comments can be watched on their stream. The recording can be made permanent; making it available for later viewing. Some of the celebrities who are planning to use the live video feature include Dwayne ‘The Rock’ Johnson, Serena Williams, Martha Stewart, Ricardo Kaka and Luke Bryan.

Reasons why celebrities will use Facebook Live Video Streaming

Twitter owned Periscope and start up Meerkat are the other competitors who have started the live video streaming feature in early 2015. However, unlike the other competitors, Facebook has made this feature available only to verified public figures and celebrities. According to Live product manager; public figures have already created their fan base on Facebook with whom they share to every single day. This huge fan following would attract public figures to use Facebook Live as they can reach to a much wider audience in comparison to other networks.

Also, videos don’t disappear in Facebook Live; adding another reason for celebrities to use it. Unlike Meerkat in which the video gets immediately deleted and Periscope in which videos are live for just 24 hours; Facebook Live video streaming is permanent. These live videos can be re-shared after the end of the live broadcast.

When the broadcasters end the video stream, the video will appear as a traditional video; but will lose the live tag. The users can replay the video indefinite times and can also like and comment below the video, just like they do for traditional videos. The Facebook Live Video Streaming will certainly make celebrities feel like recording the live streams worth their time.