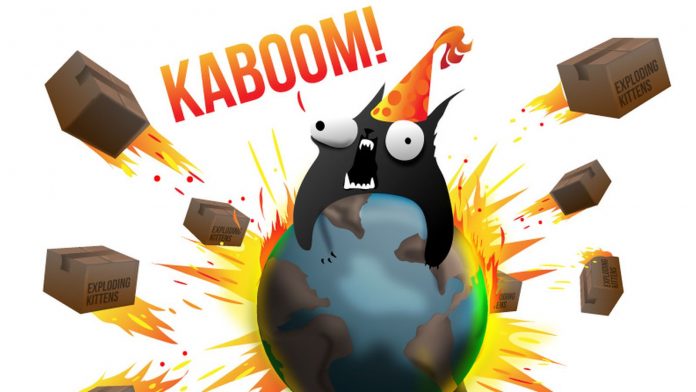 The Exploding Kittens application version of the game broke all records just on the first day of its release, securing the top spot for the number one paid application in Apple’s iOS App Store. This is another record that has gone to Elan Lee, Shane Small and Matthew Inman, after setting a record for the most funded game on Kickstarter since they had raised the required fund that was needed for making the game a reality.

As suggested by the name, there is no malicious intent that is associated with the game, as it involves kittens behaving in a normal manner and then exploding to cause mayhem all around them. The players can avoid the explosions by making sure that the kitten gets any one of the things like belly rubs, catnip sandwiches and laser pointers, such that their attention is diverted. The three creators of the app mean no harm to the kittens, as their aim was just to deliver fun and an intriguing strategy game.

The site describes it as, “It is a highly-strategic, kitty-powered version of Russian Roulette.“.

“If you’ve ever played the Exploding Kittens card game, you’d know that it’s very much a party game… [it’s] a multiplayer game you play with people who are actually sitting near you,” the site reminded. That’s why the developers used a combination of WiFi and Bluetooth in order to simulate playing using the physical deck of cards. But, they also asked for patience because the technology is new so there may still be bugs that need to be fixed.

The two main reasons for the game selling so much, apart from the gameplay, was because of two major reasons; the company had announced that all in-app purchases will be free on the first day days of the release of the application and the second one being the presence of available avatars with voices in the app.

At the moment of writing, the game is only available on the Apple App store, as the Android variant is still under development.