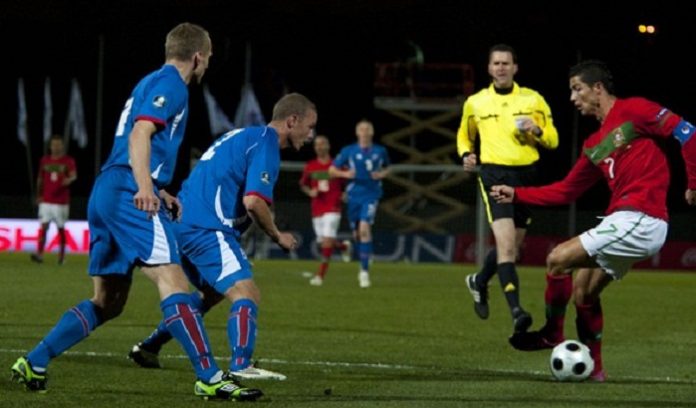 Christiano Ronaldo will be eyeing to mark the 127th win for his home side, equalling Louis Figo’s Portugal record, as the team will take on Iceland in their opening Group F Euro Cup match on June 15, 2016.

The ball will start rolling at 12.30 PM IST, and it will be telecast live in Sony ESPN and Sony Six HD in India.

Fernando Santos, Portugal coach recently told that his team is well equipped, and will be aiming to win all the matches they play in this year’s European bash up.

He also added that Iceland is not minnows, as they are physically and tactically strong. He made it clear that Iceland will do everything they can to take away Portugal’s win, and this is the major thing which makes the proceedings interesting.

Portugal’s kingpin is no one but their Captain Christiano. The legendary footballer is coming to this tournament after winning UEFA Champions League, and he will be having the responsibility to score goals for his side.

Audio streaming of this match can be enjoyed in the United Kingdom by tuning into BBC Radio 5 Live.

João Moutinho, João Mário and Nani will give an extra strength to the mid-fielding department of Portugal. The  team is impeccably settled, and they have unquestionable dominance over Iceland in this game.

Lars Lagerbäck, Iceland joint coach told that Ronaldo is one of the best players in the world, and they will do whatever they are capable in locking him down. Heimir Hallgrímsson, another coach of the team expressed his confidence stating that his side has prepared well enough for this crucial encounter.

People in the U.S can enjoy the live commentary through ESPN Deportes Radio.

Another clash in Group F between Austria and Hungary will be played at 09.30 PM on June 14, 2016. Portugal has enough cutting edge in this group, considering the less power football nations with whom Christiano and his boys will take lock horns in the preliminary stage matches.