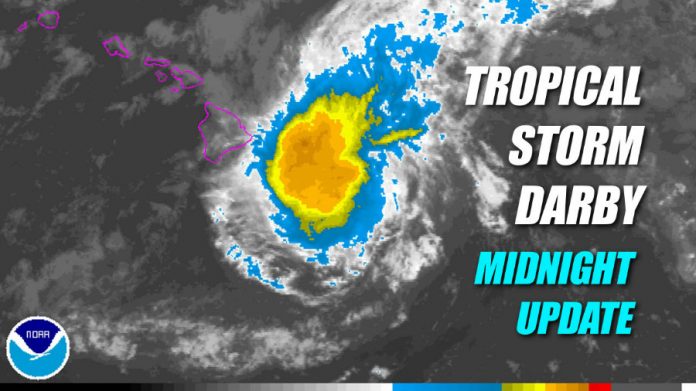 Hawaii’s Mayor Billy Kenou has issued an emergency proclamation because of the Tropical Strom Darby that threatens to hit the island on Saturday. The proclamation will be in effect for 60 days, and it will allow easier access to the island’s emergency resources and suspend certain laws for emergency purposes.

The storm approached Hawaii and Maui Country this Friday in strength. At 11 a.m, social hour, Tropical Storm Darby sustained winds of 60 mph 180 miles southeast of Hilo and about 490 miles southeast of Honolulu, while the eye of the storm extended for 125 miles. The storm was moving at 12 mph.

“We want to make sure we are doing everything possible to protect the public,” assured Kenoi in a news release. “This proclamation improves the country’s ability to respond quickly to any potential impacts from the impending storm.”

Central Pacific Hurricane Center forecasted a direct impact on the Big Island and Maui during the weekend, and a 33 percent chance of hitting the capital, Honolulu, with winds greater than 39 mph.

Countries authorities recommend to have supplies and be ready for power shortages. Emergency kits are vital, with enough food and water for the family members, including the pets, for seven days. The kit should also prioritize rechargeable batteries, flashlight, first aids and other necessary medications.

As an additional precaution, the Maui County Department of Parks & Recreation will be rebooking all overnight camping permits during the weekend.

The Maui County Civil Defense also recommends not to focus on the exact words of the forecast track as it could be wrong and damages can extend far from the center of the storm.

They state population should keep calm and stay informed over, carefully listening to any local news outlet for official information. Loose objects as lawn furniture, garbage cans or potted plants should be safely stored indoors. The final tip is to be ready to evacuate if necessary and comply all advice and orders issued by local officials. This is particularly the case for persons living near the shore.

Bring pets inside, as animals have instincts about severe weather changes and may isolate or run away if they are afraid. Don’t leave your mascot tied up during a storm.

Make sure your pet is wearing a collar with an ID tag. If possible, get your pet micro-chipped. Separate dogs and cats, because the anxiety of an emergency situation can cause these animals to act irrationally and even attack each other.

If you find a stray pet during a storm, private it shelters until the weather conditions are clear. You can then leave it in the Humane Society shelters in Keaau, Waimea, and Kona. Families that are going to a pet-friendly evacuation site or refugee should go prepared with food, water, bowls, towel, litter, litter box, identification, and medication.

Tropical Storm #Darby is causing some high waves for much of the eastern coast of #Hawaii today. #HIwx pic.twitter.com/b7cEQmesHQ