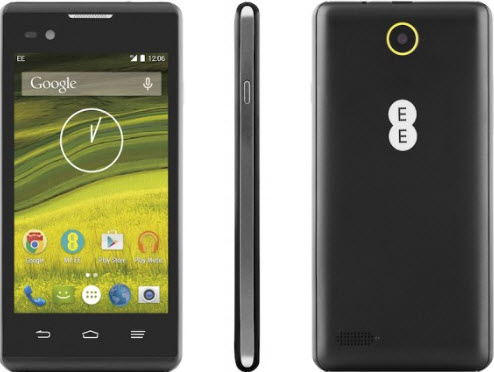 Exciting news for all the residents of UK. ‘Everything Everywhere’ or UK’s EE telecom company has brought country’s cheapest 4G enabled phone at the price of £39. The company has named this new handset as ‘EE Rook’.

The specialty of this phone is that it’s a 4G enabled phone, yet it is phenomenally affordable. Apparently, the existing EE customers need to pay only £39. However, the handset will set new customers back £49.

EE mentions that EE Rook is the best deal for its price. It is currently being compared with Samsung Galaxy S6 and iPhone 6, which cost £559 and £539 respectively. Rook is an Android phone. However, EE Rook does not have many features as Samsung Galaxy S6 or iPhone 6 smartphones. The best feature about EE Rook is its capability to connect 4G LTE. That means the smartphone has the ability to download at the speed of 30Mbps.

The remaining features are not very outstanding. The Rook packs a 4-inch 800×480 screen and a 1GHz processor. It offers 1GB of RAM and 8GB of phone storage. Users can increase the device memory by using a microSD card. The phone has a 5-megapixel camera and 1,500mAh battery. The battery offers 5 hours of talk time and 400 hours of standby time.

EE or Everything Everywhere Company had launched cheap smartphones in the past as well. These were Harrier and the Harrier Mini. In fact, Harrier Mini is also a 4G enabled smartphone and it was the cheapest of its genre till EE Rook was released.

Earlier, EE was known for poor landline and broadband services. It will be interesting to see how EE Rook performs after its arrival.