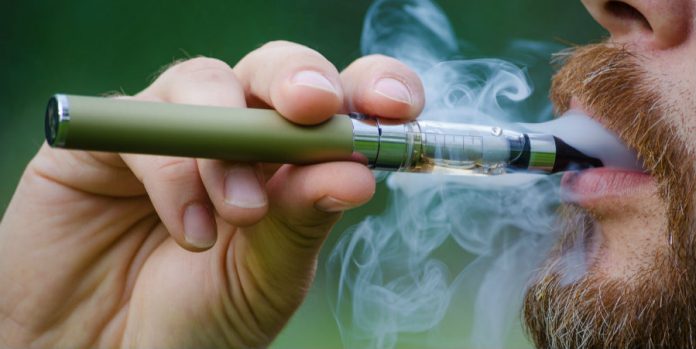 A new study published by Environmental Science and Technology shows that the thermal decomposition of propylene glycol and glycerin, the substance vaporized by the e-cigarette emits toxic chemicals such as acrolein and formaldehyde.

A team of researchers led an experiment simulating vaping with three different type of e-liquids on two separate vaporizers. One was a standard model using only one heating coil while the other one was more expensive and it used two heating coils in parallel, both e-cigars were also tested at various battery power settings.

The experiment tested both e-cigarettes and its used gas and liquid chromatography to determine what kind of chemicals were contained in the vapor. The puffs were both at an early stage as well as when the vaporizer heated up and reached a steady state.

Findings showed that first and latter puffs create a very different. The researchers built a vaping apparatus that emulated vaping habits. They found that the vapor temperature rose its temperature on the first five to ten minutes until it reached its stable temperature.

Later findings showed that between the first few puffs and the last ones the emission levels rose by a factor of 10 or more depending on the type of e-cigarette being used, the battery voltage and the compound used.

When comparing the conventional cigarettes to the e-cigarettes, they found out that a standard cigarette emits 400 to 650 micrograms of acrolein per cigarettes, while taking 20 puffs on a vaporizer which they agreed it was equivalent to a regular cigarette the total emission of acrolein was about 90 to 100 micrograms.

In a different experiment, the researchers tested using the former e-cigarettes over nine consecutive 50 puff cycles without cleaning it. The test showed that carcinogens or respiratory irritants such as acetaldehyde, acrolein and formaldehyde rose up to 60% in some cases.

A different test also evaluated the importance of voltage used on e-cigarettes. The test determined that both the vapor temperature and the e-liquid consumed at higher temperatures was more significant than when used at low temperature.

Hugo Destaillats noted that they are not saying that vaporizers are safe to use on lower settings, they found out that even when they are used on the lowest setting possible, there is toxic chemical emission involved.

The study focused on two elements that were common on almost any e-liquid, the propylene glycol as well as glycerin. Mohamad Sleiman, Berkeley Lab researcher, said that even though these factors are considered safe for food there are little to no studies regarding the safety of heating and consuming these elements.

When the researchers vaporized different liquids consisting only of the solvents to clarify if they were the cause of an emission, they found 31 different types of noxious chemical compounds.

The researchers even found two new types of chemicals that were never related to the e-cigarette’s vapor, propylene oxide and glycidol, which they described as possible carcinogens elements.