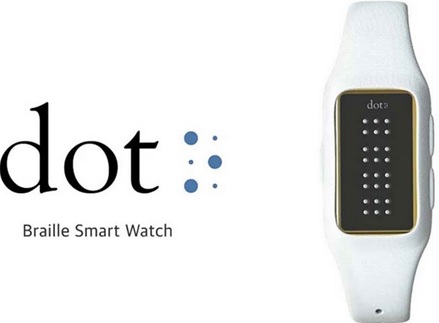 South Korea – Technology innovations has no limits. A South Korean startup called Dots created a smartwatch that can help the visually impaired people people read, the digital way! The Dot is a Braille Smartwatch that comes as a solution for those have problems with their sight but still want to enjoy the benefits that digital technology has to offer.

With this smartwatch one can read all the necessary information and notifications through a very innovative system of four sets of six digits that can get up and/or hide 100 times per second, in order to create four different characters of the Braille system at a time, directly and in real time.

The innovation mentioned above, is what will allow blind people to tell the time or whatever appears on the screen and all that with no extra help from other people. It is truly a breakthrough while not only does it help blinds, but it also allows companies (other than the South Korean start-up company that got the idea) to target a whole new group of consumers in the industry which will probably also lead to the release of a whole bunch of new series with special features.

The Dot is estimated to be fully functional with only 10 hours of charging. It can also notify the user for any situation by vibrating while it can connect to any smartphone via Bluetooth. The company that created the Dot is intending to embody the same technology on many other more devices, such as ATMs in banks, household appliances and other items.

At this point, it is worth mentioning that approximately 90% of the people who lose their vision, lose it shortly after their birth which means that those people have been totally cut out from the daily use of digital gadgets and their privileges. But as it seems, that is about to change thanks to North Korean start-up company that came up with this brilliant idea. The company’s CEO Eric Ju Yoon Kim, has told “Tech in Asia” that when the Dot watch comes to the United States in December, it will retail for less than $300. Stick around to find out what will happen next with the