As a part of a traditional Copter Race by Noosphere, a stage of FAI World Cup in drone-racing took place in Dnipro, on September 23-24. The Sports Complex “Meteor” witnessed a breath-taking UAV competition in F3U class for the first time ever. The event involved 40 contestants from 4 different countries, Switzerland, Poland, Ukraine, and Germany, who took part in a fascinating drone battle.

September 2015 is the official date Association Noosphere brought the drone racing sport into the spotlight. Up to now, Max Polyakov’s Noosphere has been the host of 5 contests in drone racing, but Dnipro has now become the venue for an FAI sponsored event for the first time. The city features the list of 16 cities worldwide that were honored to make arrangements for a stage of the FAI Drone Racing World Cup. The drone tournament was judged by 2 referees from Ukraine (Dmytro Franchuk) and Italy (Oscar Chinello, the official representative of the Italian FAI). 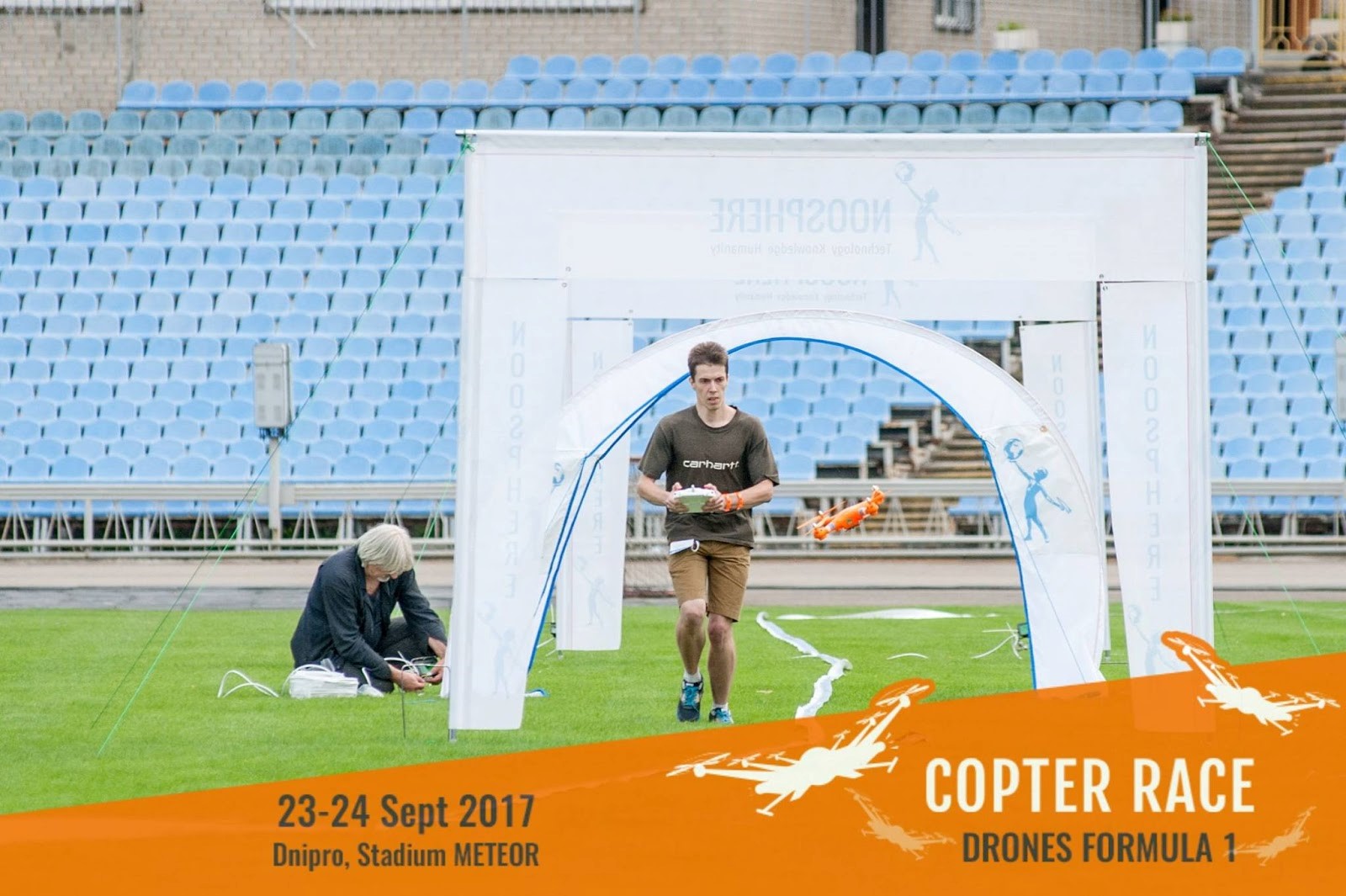 As commented by the co-founder of Noosphere, Max Polyakov, drone racing is a young, yet promising air sports discipline that is gaining momentum. Certified in 2016 by The World Air Sports Federation, the regulatory instruments and the racing rules are still developing. Max Polyakov went on to add that his company Noosphere Ventures and the FAI partnered to hold the Copter Race as part of World Cup in drone-racing to live-test CupNavigator. This newly-hatched scoring system that simplifies everything to do with organizing an event of this scale, performed beautifully during the races.

The drone tournament began with the evaluation of pilot qualifications. However, the first day of the Drone Racing Cup was also marked by bad weather conditions that caused certain equipment to malfunction. In spite of that, the contestants kept a positive attitude and were excited about the upcoming competition.

Aside from the official part of the first-day schedule, organizers from Noosphere headed by Max Polyakov have granted all the fans of drone sports the opportunity to operate a UAV themselves. This activity was named the Fan Copter League, which everyone from amateur pilots to event attendees could try their hand at. Another activity that entertained the crowds, was a freestyle competition in stunt flying. Visitors were amazed by ingenious backflips, loop de loops, dive-bombers, and stunts! As the finishing touch, the first day of the Drone Racing Cup by Noosphere Ventures wound down with a colorful drone-racing show in the night sky.

Additionally, with the support of Noosphere Ventures and Max Polyakov, Victor Dzenzel was awarded $1000 from KAMA KOREA, the official aeromodelling association in Korea. Victor will represent Ukraine at DAEGU DRONE RACE WORLD CUP 2017 by the FAI. The prize money is to cover his transportation costs.

Noosphere Copter Race 2017 by Max Polyakov was intended both as an exciting drone-racing tournament and a family weekend. All the visitors were able to attend numerous exhibits, workshops, and specially equipped game zones. Even the smallest attendees of the FAI Drone Racing World Cup enjoyed the weekend, playing with drones, competing with each other, and building toy-rocket models.