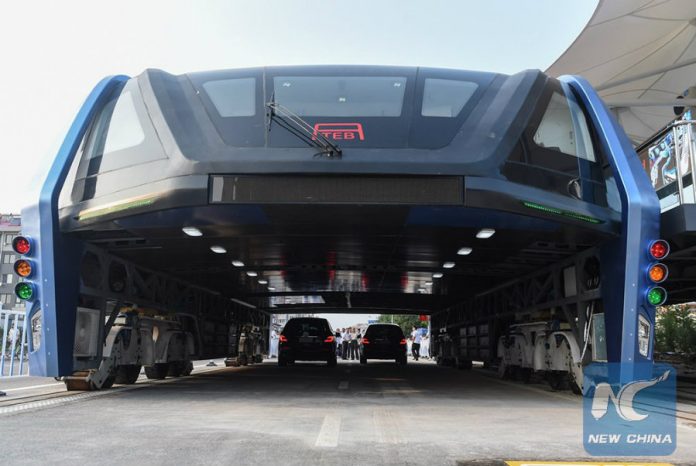 This week, the elevated bus TEB-1 (Transit Elevated Bus) went on its first test in the northeastern city of Qinhuangdao, China. The TEB-1 is a bus, as said in the name, elevated to a high where cars can transit beneath its free space.

According to TEBTech, a company that helped build the TEB, the test was done to evaluate the bus’ braking system, drag and power consumption.

What can be expected of the TEB-1?

It is a bus of 22 meters long, 7.8 meters wide and 4.8 meters high and can carry up to 300 passengers. The interior of TEB-1 features some round seats in the middle and 18 seats along the wall with plenty space to stand.

The outstanding thing about the bus is the space beneath it for cars to circulate freely and not produce traffic, and not being part of traffic jams either. Because of the height, some of the larger trucks will not be able to pass beneath it. At every corner of the bus, it has traffic signals to alert the cars and below it.

The TEB runs on sixteen wheels and is guided by eight pairs of rail wheels, and it is supposed to run at 45 km/h.

Because of skepticism around the bus involving some possible collisions, city officials have laid tracks for the bus test drives to address the safety of it. The bus follows the path of the rails, making it some hybrid between a bus and a train, which means it cannot take a deviation from its course. Passengers board the TEB-1 from elevated platforms, something that can be scarier and less exciting for some people, but it is probably safer.

The test and presentation consisted of putting the bus and run it on a track of approximately 300 meters and very cautiously. Details about how it would be implemented in real life were not given and if the government would have to adapt within the streets by creating the rails as in the presentation or if ultimately it will run with regular bus wheels

Besides easing the traffic, the TEB-1 would also cut the annual fuel consumption by 800 tons and carbon emissions by 2500 tons.

Introduction of the idea and development

Back in 2010, Chinese engineer Song Youzhou introduced the concept of the futuristic idea that would later become the TEB, but due to some doubts around it, a trial run was canceled.

In May, Mr. Youzhou presented another concept of the bus at Beijing’s 19th International High-Tech Expo. The New York Times reported that same month that Qinhuangdao, the city where the TEB-1 was tested this Tuesday, was one of five cities that signed contracts with the TEB Technology Development Company for pilot projects.

Mr. Youzhou told The New York Times that each bus would cost around $4.5 million. He also said to WCC Daily that if all goes according to plan, the vehicle could enter the market in a year to a year and a half. Back in July, the company unveiled the finished product.