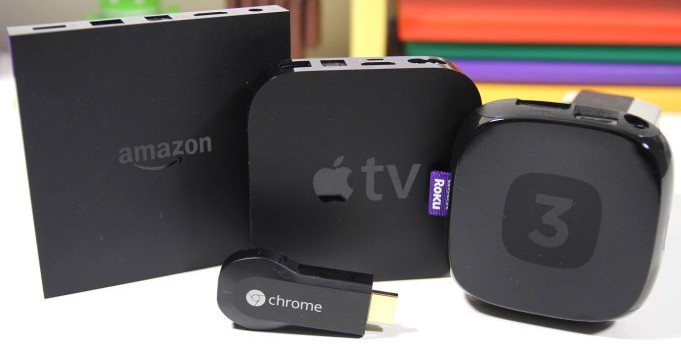 Online streaming has been slowly dethroning the obsolete cable TV, so with that in mind we thought it would be helpful to provide you with the best deals on the most sophisticated streaming systems currently in the market, for Black Friday 2015.

Amazon’s streaming set is available for $24.99 (standard remote edition), saving you $15 – the original price was $39.99. The Fire TV stick offers over 250,000 TV episodes and movies on Amazon Video, Netflix, HBO GO, and Hulu, as well as games and music.

Amazon claims that the Fire TV stick packs four times the internal storage and twice the RAM than Google’s Chromecast does, as it is sporting 1GB of RAM and a dual-core CPU.

The device will be in stock starting December 5, though pre-orders will start from today. There is a free two-day shipping option for Prime users available as well.

Roku has been one of the oldest members of the club, with its streaming box sporting a slew of innovative features. We found the Roku 3 on BestBuy for $79.99, saving you $20 – the original price was $99.99. The Roku 4 latest gen device has not undergone any notable price drops.

It might cost a lot more the Fire TV, though, as mentioned above, Roku 3 is a premium streaming box, boasting motion-enabled remote control that also packs a 3.5mm headphone jack, thus allowing you to watch your favorites series without disturbing others, voice search and much more.

In terms of content, the Roku 3 has access to more than 2,000 streaming channels; including Netflix, Hulu Plus, HBO GO, Amazon Instant Video, Disney, Crackle, NHL, NBA and MLB, music and games as well. The deal includes free shipping all across the States as well.

Apple is known for the whopping pricing strategy that is applying on all of its product line-ups, hence if you are looking forward upgrading your iPhone or MacBook, now is the time. Apple’s streaming counterpart is available on BestBuy for $39.99, saving you $30 – the original price was $69.99. The specific model is Geek Squad refurbished certified.

The best deal for a new model was available on Walmart for $50, and the bundle included only the Apple TV. The BestBuy deal offers the Apple remote as well.

As far as content goes, the full HD streaming box brings access to over 15,000 movies and 90,000 TV show episodes in the iTunes Store; Netflix, games, music and much more. AirPlay and iCloud software features are on board, while the gadgets is powered by Apple’s A5 CPU.

Moreover, free shipping across the US applies on the particular sale as well.

Google’s streaming gadget – 2014 model – can be obtained from Walmart for a jaw-dropping $20, saving you $15 – the original price was $35. By plugging the dongle in your TV’s HDMI import, you instantly have access to Netflix, YouTube, HBO GO, Hulu Plus, Google Play and Chrome.

To control the device, all you have to do is download the respective remote controlling app from Play Store on your Android smartphone and tablet and you will be good to go. In case you are an iOS user, have no worries, as the app is available for the iPhone and iPad as well. If you do not own either of the above, the Chromecast app cam be downloaded on laptops as well. A two-year warranty is included for an additional $2 fee.

Which streaming device will you be opting for? Let us know in the comments below.