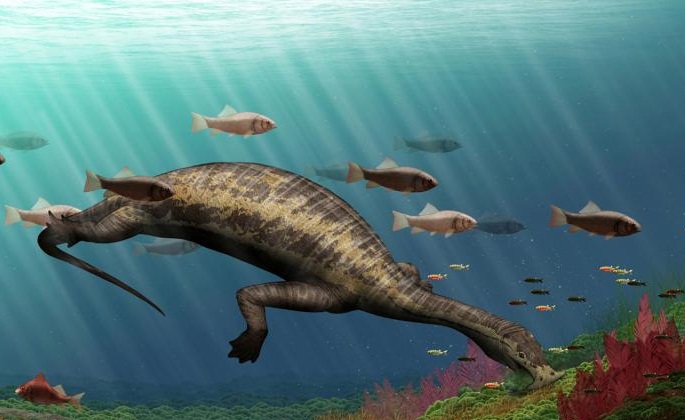 In 2014, scientists unearthed the bizarre fossil of a crocodile-sized sea-dwelling reptile which is believed to be lived on Earth more than 250 million years ago.

After thorough studies on this fossil, scientists have made a startling revelation on May 08, 2016 in Science Advances journal. According to the new fossil study, the crocodile-sized creature was the first known vegetarian marine reptile.

When the fossil was first discovered, researchers found that head of this creature was poorly preserved. But further analysis by paleontologists revealed that the beak is nothing but part of a hammerhead-shaped jaw apparatus. The beak is used to feed on plants on the ocean floor.

Olivier Rieppel, the lead researcher in this study, told that the newly found animal is very strange, and the hammerhead it possesses is very much unique in nature. Rieppel added that he has not ever seen a living creature like this.

The newly found animal has been named, Atopodentatus unicus. In Latin, this name means ‘unique strangely toothed.’ The wide jaw of this prehistoric creature have the shape of a hammerhead, and along the edges of its beak, it has bunches of needle-like teeth for chewing after picking up the food. The bizarre jaw in this creature clearly indicates that it is a plant eater.

According to recent studies, only a handful of marine reptiles are herbivorous, and Atopodentatus unicus falls in this table.

To make things clearer, scientists made a model of the jaw to see how the animal eats its food. Researchers analyzed the way in which the upper and lower jaw are locked together, and made the conclusion of its plant-eating nature.