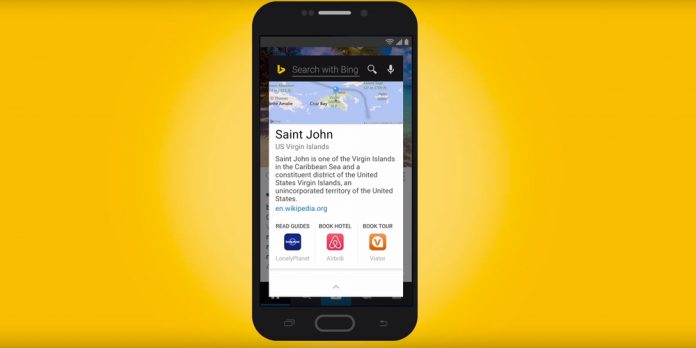 Microsoft (NASDAQ: MSFT) seems to be a step ahead of Google (NASDAQ: GOOG) as the company updates its Bing for Android app with features that one would expect to see on the Google Now on tap.

More particularly, the Bing for Android allows the capture of snapshots with additional info when one is on a website or watching a video on YouTube. By holding the centre button, one can open a new window with more information and suggestions on whatever one feels like searching on the internet.

Moreover, by pressing the centre button you can scan whatever is being displayed on the screen at the moment while new references to new sites are being shown in order to get further info on whatever you are interested in. In other words, you can make a complete search and find whatever you want by taking pictures of your phone’s screen. This is possibly the easiest way to make any kind of search.

At the same time, Microsoft announced that it gives to its developers a new API, which is named Bing knowledge and expertise API, in order for the developers to be able to embody the search through Bing to all the apps that they create and for all platforms. So basically, developers can give to Bing the ability to offer its services to a billion users, by using 18 billion connection and activities that other users can take advantage of in real time through the use of the API and Bing’s database.

All the above seem like an impressively big update for Microsoft’s Bing but given that it still is not as popular as Microsoft would like to think, perhaps the company should consider putting some weight on the promotion of its search engine.