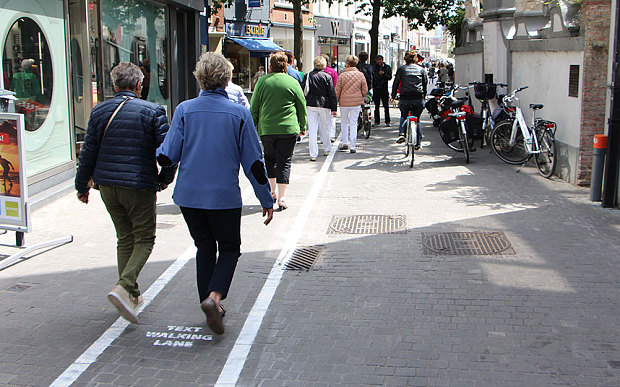 It appears that Antwerp, a city located in Belgium, has plans to prevent people from bumping into each other due to their phone addiction. Antwerp created a special lane for these people, that looks like a narrow corridor, marked with white bold letters ‘text walking lanes‘. The lanes have been designed in a number of busy shopping streets, according to Telegraph.

The idea stems from a local mobile business, Mlab, stating that a slew of handsets has been broken due to this sort of accidents. Officials claim that if the plan works and the number of collisions reduces, then there is a serious possibility of making the lanes permanent.

“ Everyone ‘textwalks’. You probably walk through the streets while texting or sending Whatsapp messages to your friends and don’t really pay attention to your surroundings – only to whatever is happening on your screen.

This causes collisions with poles or other pedestrians. You could, unknowingly, even be endangering your own life while you ‘textwalk’ when you cross the street without looking up.”

Though, let’s assume I walk on one of these lanes. What happens if a pedestrian comes from the opposite direction? Since our eyes are glued on the phones it is improbable that we will see each other in time thus preventing the accident. That is something that Antwerp and Mlab should definitely take into consideration for this scheme. Irrefutably though, the whole concept is a great initiative.