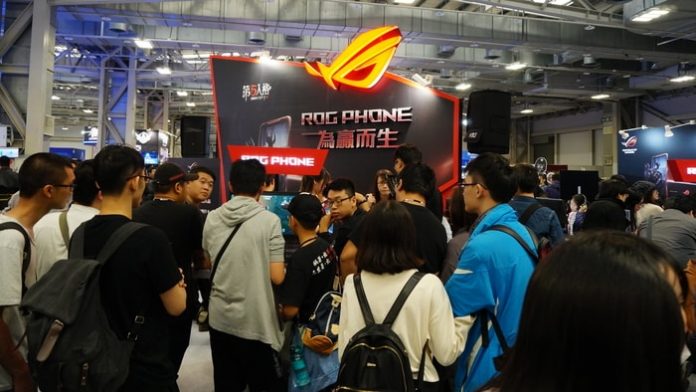 The most powerful and feature-rich phone on the market right now it’s the ASUS ROG phone. It’s got a Snapdragon 855 plus, it’s got 120 Hertz AMOLED display, it’s got 12 gigs of ram and 512 gigs of storage and a lot of amazing hardware in this device.

However, the problem is that it’s a gaming phone, and traditionally gaming phones are just not a great purchase. Most people shouldn’t be purchasing gaming phones. There’s just not a good value, even if you’re looking for something that’s really high performance. However, this phone is different.

We feel like they geared the RG phone be appealing to people that aren’t even interested in games at all. If you just want a high-performance phone, this is that phone now.

If you look at the specs on this monster, obviously it’s going to perform well. The Snapdragon 855 plus is overclocked, the CPU and the GPU are overclocked, The GPU, in particular, bumped up by like 15% so when you run benchmarks on it. It’s a clear leader and packages that with 12 Gb of RAM and 512 Gb of storage, it’s very fast.

About the screen: it is a 120 Hertz AMOLED display. This screen is even faster than the One Plus 7 Pro. It’s 120 Hertz and believes me, your eye can actually discern the difference between the two. It’ll be impossible to show this difference on a video that’s being shown at 24 frames per second, but we believe most people can actually tell this apart.

If you’re looking for the smoothest possible experience, then the 120 is faster and, because the RG Phone 2 is a gaming phone, there’s more support from game developers to make use of the higher refresh screen. When we personally see mobile games take advantage of a high refresh screen, we can’t help but be impressed.

There’s other stuff to this phone that makes it kind of gamer-friendly. It’s got the air triggers on the top which allow you to bind this kind of pseudo buttons at the top of the device. They’re not actually physical buttons that depress, it’s more of a capacitive sensor that when you press that area it can trigger a software button in the game and allows you to just give extra functionality within games.

They’ve improved on the latency and the sensitivity of it, so it feels a little better compared to the last year’s version and it also has some great speakers. They are loud, clear and well-positioned right in the front like these are significantly better speakers than the ones on the One Plus 7 Pro.

It also has the RGB lighting on the back. This is something that’s honestly a little gimmicky, but it is kind of cool to change the color of the light on the back of your phone. It’s clearly not for everyone, it’s not even for me, but for the people that are interested in this kind of stuff, they have that availability. You can also turn it off if you don’t like it.

You also have simple hardware upgrades: they have a fingerprint sensor that’s built to the screen this year, the camera hardware was improved, it’s now running wide-angle lens. It’s a cleaner design this year, and the international version of this phone is supposed to be matte black or glossy, and the vent is also functional this time around.

The vent last year was more of an aesthetic gimmick, this time it’s functional. More importantly, is the software. They’ve finally decided to support stock Android right out of the box, so when you boot it up for the first time, you can choose between stock Android or their over-the-top ROG theme.

This is a device that is much improved over the first iteration. It has got better hardware, significantly better software, and we think for people that are gamers, this is a pretty obvious option. It’s powerful and thus great for mobile games.

Still, even from people that don’t play games and just want a high-performance phone, the device is really solid overall. I think this device fits the ticket this year. If the Asus ROG Phone 2 was a football athlete, we are pretty sure it would have the potential to be NFL MVP of 2019.

We are not saying it is the best phone in the market – every user has its own choices – but it is surely an efficient device who can score touchdowns in pretty much all aspects.