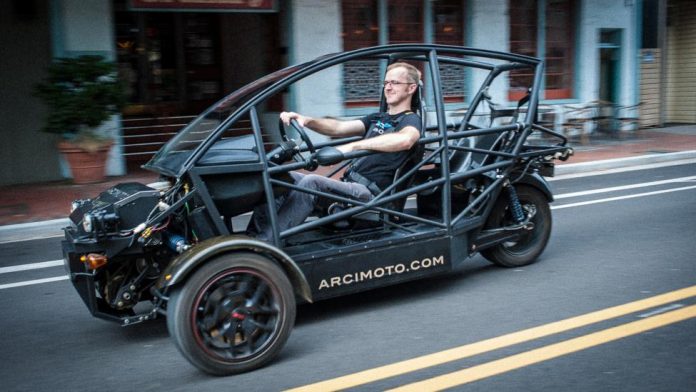 This year, at CES, electric vehicles were a very big thing. With a number of electric cars up and about for display, the Arcimoto SRK was the cheapest and the most pared back vehicle that caught our attention.

The SRK is an electric trike with a two wheeler setup that is in the tandem configuration. The driver will do the front steering with handlebars. Earlier, Arcimoto had chosen to use a proper steering wheel for maneuvers, but later changed to handle bars which made the SRK a motorbike. This made homologation better than the cars. There are some features that the SRK sports and are not available in any bike; some of these include the fact that the vehicle can not topple over due to the three-wheel configuration, which helps in distributing the weight properly throughout the vehicle in a 70:30 ratio.

As the SRK comes with a windshield and seat belts, there is no need for you to wear a helmet, however, you may need to attain a motorbike licence if you want to drive this in some states. The car-bike also comes with luggage space at the back, giving it an extra point for practicality. The main attraction of this bike is the price at which it sells for; the MSRP is $11,900 before any tax credits or rebates from the government.

Up front, the wheels are powered by two electric motors and in the middle of the car, the battery pack is present. Two battery pack configurations are available; the 12 kWh and the 20kWh. The 12kWh battery pack is capable of providing 70miles of range, whereas the 20 kWh battery bumps it up to 130 miles. The top speed for this electric vehicle is 85mph, which is adequate enough and is a decent speed for city driving.

For those of you who don’t want to expose themselves to the elements, side panels are also made available. The company has also been working on providing additional gimmicks that include removing the back seat and using that space for making a rear cargo space.

As of now, the SRK has not yet entered into production, although, at present, Arcimoto is accepting $100 as a refundable deposit from future customers.

While it is true that this electric vehicle is not the ideal choice for a lot of people, though, considering the price at which this vehicle sells for, as well as its low maintenance expenses, it is a good buy for those who are looking for an option that assists them in travelling casually through the city.