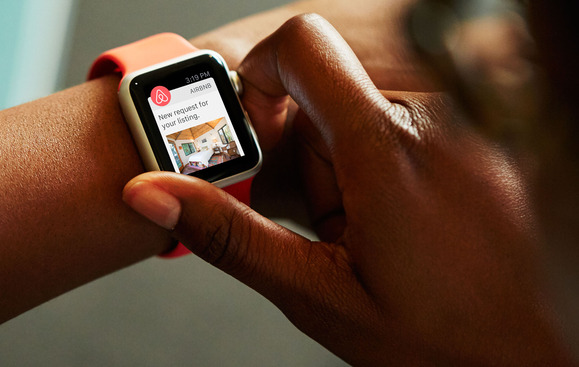 Airbnb, a service for people to list, find, and rent lodging, has now decided to expand its service. Up until now the company had only launched an app for smartphones that indeed managed to attract a large number of customers in a short period of time.

Now, we see its first app designed for a smartwatch and more particularly, the Apple Watch exclusively. The app has many built in features that can help both the guests and the renters. Clearly the company’s goal is to boost its presence in the industry of alternative accommodation that it has already created. This is why the app has been designed to be as easy to use as possible in a degree that it feels like using a chat app for both parties.

One of the most important features that has been added to the Apple Watch app, is the ability for the host to respond to a message from a client, with either a voice message that can be dictated on the spot, or canned replies written by Apple but can be modified thanks to Airbnb.

What’s more interesting is the app designed by the company for the Apple Watch is noticeably different than the one designed for iPhones. Engineers tried to create user wish lists, by testing listings browsing and finally decided to go with something simpler.

However, the mixed reviews concerning other apps on this wearable, raised Airbnb’s worries and as Keenan Cummings, head of what Airbnb calls experience architecture, mentioned they didn’t want to design a clunky, hard to use app.

“For the watch, we didn’t have any kind of gut or intuition about what that experience should be,” he added.

As for other users and operating systems, the news is not good at this part. Airbnb stated clearly that it does not wish to release an app for competing platforms, something that could cost the company a lot of money and customers since two things are certain: First, sales on the Apple Watch have not been going well this last semester, and second, the majority of smartwatch owners, are using a wearable with a different OS than the iOS.

Plus, with Google’s Android Wear that makes smartwatches work with the iPhone, Airbnb is probably missing a good investment for a not so obvious reason. In fact, when a spokesperson was asked on the expanding policy of the company, he answered: “We will want to build experiences for platforms that we believe our hosts and guests will use”.

At the same time, Mr. Cummings commented on the subject saying:

“I am excited for the new capabilities of WatchOS 2, but at the same time I liked having the constraints. We want to avoid doing the things that are tempting because the capabilities are there.”

The Airbnb app will be compatible with both Apple’s existing iOS 8 software and its upcoming iOS 9 software.