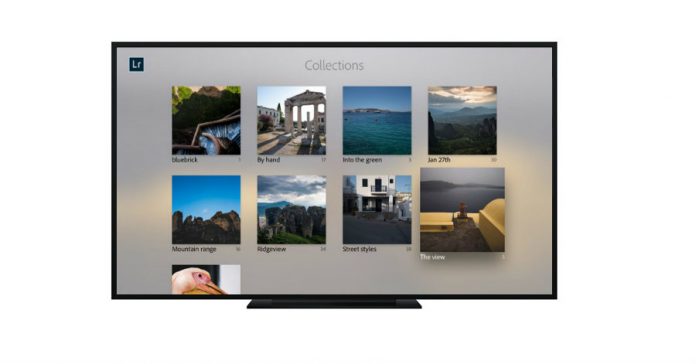 Adobe has finally launched Lightroom for Apple TV. Starting today, the photo editing application can be downloaded to view images, but not edit them (no joke), on Apple’s most recent device.

Adobe Photoshop Lightroom is already a very popular amongst professional and amateur photographers alike for viewing, managing, editing, and sharing images. But now with Lightroom for Apple TV, families and individuals can show their memories to friends, while architects, home designers, and other professionals could also make a good use of it.

“We’re proud to introduce the newest member of the Lightroom family: Lightroom for Apple TV”, read the announcement made last Tuesday through a post on the Lightroom Journal.

About Apple TV and Lightroom

Apple TV is a digital media player developed and sold by Apple that can receive digital data from some sources and stream it to a capable television. For viewing, it has to be connected to an HDMI widescreen television with an HDMI cable.

The device can be controlled using the Apple Remote control it comes with or via Wi-Fi with the iTunes Remote app, which can be downloaded from the App Store to iOS devices like the iPhone, iPod Touch, iPad, and Apple Watch. The fourth generation Apple TV was launched in 2015, with current Apple CEO Tim Cook stating that “the future of TV is apps,” such as Lightroom.

What Lightroom offers to Apple TV

Apple TV users will now be able to view and share all of their synced Lightroom photos and collections on the big screen, including those they’ve uploaded via Lightroom CC on their desktop, Lightroom on mobile, or Lightroom on the web.

Lightroom for Apple TV allows users to find quickly that desired memory they’re looking for. Navigation, though, has to be done exclusively with the remote control, as the app doesn’t support Siri search to find photos by voice.

Images can be viewed as synced collections (Adobe’s version of photo albums), as an entire library of all Creative Cloud images, or one by one, having the possibility to stop and zoom in (up to 200%) to watch them carefully.

All photos, however, are always available with its latest edits before syncing. So, ironically, this means that users can’t use the editing aspects of the software in Lightroom for Apple TV.

“We’d love to hear what you think about the app, as well as any recommendations for the future”, said Josh Haftel and the Lightroom team in the blog post.

Well, they should probably allow the photo editing app to edit. Designed for large-screen viewing of images in your home or studio, Lightroom for Apple TV requires a 4th generation Apple TV. Additionally, a Creative Cloud subscription is needed to log in. As of right now, users can download the app for free from the Apple TV App Store.