Ford Motor Company (NASDAQ: F) unveiled the off-road 2017 Ford F-150 Raptor at the North American International Auto Show. The pickup will start with a price around $49,520, will hit the showrooms in late November and take off to the stores in December.

The company assures the truck takes road performance to an “intimidating level.” From suspension to the drivetrain, the developers designed the vehicle to pack sheer strength and race through the most difficult wastelands.

The performance truck is part of the Built Ford Tough brand, so it features military grade power. It will debut the high-output 3.5L EcoBoost engine, along with the all-new 10-speed transmission, and long-travel suspension optimized for racing.

The Raptor series began in 2010 as desert travel trucks, but the improvements in off-road technology have pushed the model to the top of the high-performance market.

2017 Raptor vehicle will be available soon in local Ford dealers.

The F-150 Raptor was designed to be a no-compromise, performance off-road machine

2017 Raptor F-150 is the most capable Raptor yet. It will get 450 horsepower and 510 pound-feet of torque, alongside a military-grade aluminum alloy body that will make the new truck 500 pounds lighter than its predecessor. 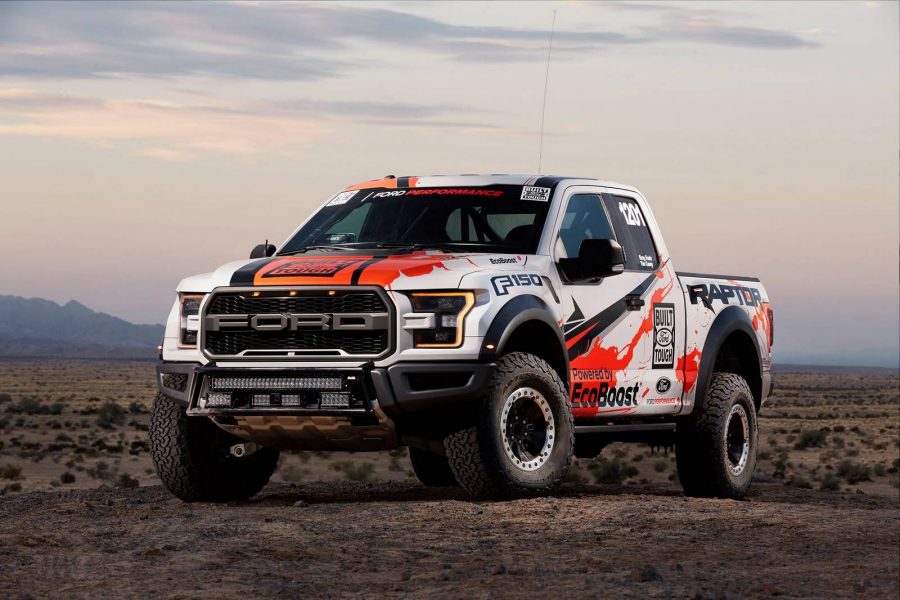 The engine is a twin-turbocharged 3.5L EcoBoost. EcoBoost technology provides direct fuel injection that delivers more power than the previous 6.2L V8. The fuel efficiency is an average of 16 miles per gallon.

To manage the power distribution between front and rear wheels, Ford added the four-wheel-drive, torque-on-demand transfer case. The system combines attributes of clutch-driven 4×4 with the more durable mechanical 4×4.

The outside is raw, the engine is powerful, and the interior is luxurious

The Raptor is going to take off with two cabin configurations, each of them with a different wheelbase: 133 inches (Super Cab), and 145 (Super Crew).

Lastly, 2017 Raptor has LED lights on both the head and the tail. The signature grille with 35-inches tires prevails in the model, although the upcoming truck will be six inches wider than its predecessor.