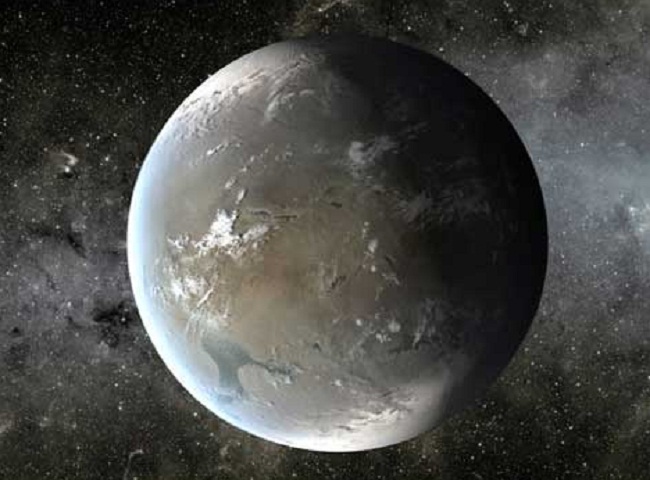 Kepler-62f, a planet is situated in the direction of the constellation Lyra, 40% larger than Earth and might also have life on it. The exoplanet could have water in liquid form, and there is a good prospect for the existence of Active Life.

The newly discovered body, because of its size is tantalizingly within the range of cosmic bodies likely to rocky and could also feature oceans.

The planetary system is composed of five planets orbiting around a star which is cooler than our sun. It was discovered in 2013, and the planet in question is the outermost of the system.

However, it is not possible to have the details of the ingredients of 62f’s atmosphere or the contours of its orbit. So scientists came up with different scenarios about the composition of its atmosphere and the nature of the planet’s its orbit.

For water to remain in a liquid state the atmosphere composition must contain some proportion of greenhouse gas as CO2. Earth’s atmosphere contains 0.04 percent CO2.

Since 62f is further away from its star, it must possibly contain a higher percentage of CO2 for liquid water.

Using computer simulation, the research team concluded that the planet will require an atmosphere which is five times thicker than Earth to be habitable all year long. The same technique is also employed to understand if exoplanets much closer to Earth are inhabitable.

Another factor which could make any cosmic body habitable is its orbit around its parent star. Certain types of orbit will allow the exoplanet’s surface temperature to remain above freezing point of water at certain times of the year – even with much lower levels of carbon dioxide,

Since the launch of the Kepler space observatory by NASA to discover Earth-size bodies with the possibility of life orbiting other stars, more than 2,300 cosmic bodies have been found, but only a minuscule are said to be within the habitable zone also known as the Goldi Locks region or the Circumstellar habitable zone.1,200 Light-Years Away, This Planet May Have Active Life